Podcasts are a way to connect to broad audiences and inform people of interesting and relevant topics. This message was conveyed by Dr. Melissa Brzycki and Dr. Stephanie Montgomery at “Beyond the Classroom: Podcasting, Public History, and Popular Culture,” a talk about their podcast “East Asia for All.”

The co-hosts are both East Asian historians by trade. Brzycki is a current member of the Saint Mary’s University History Department, and Montgomery is an assistant professor of History and Asian Studies at St. Olaf College.

After having spent time living and teaching in East Asia, Brzycki and Montgomery decided to use their knowledge and expertise in a way that went beyond the classroom. They wanted to connect with audiences larger than those of their students and colleagues. “There is often a problem in which universities and academics don’t really have a good relationship or have much communication with people outside of the university or academia,” said Brzycki. “We wanted to do something to bridge that gap.”

Brzycki and Montgomery explored many different project options. They asked themselves how they could make the most use of their time and reach the widest possible group of people. They settled on podcasts for a variety of reasons. With podcasting, there is a low barrier to entry, and extensive knowledge of digital tools is not necessary. Podcasts also offer an alternative learning option that differs from traditional practices. “Particularly for history, but academics in general, there is a lot of emphasis on the production of text and writing,” said Montgomery. Podcasts are useful tools for people who learn best from listening.

Coming up with topics is a fun process for Brzycki and Montgomery. They both love East Asian pop culture and most of their topics stem from this passion. Brzycki related that she often says, “I really love this thing, let’s do an episode on it.” Their topics also concern things they believe to be pressing issues. Their first episode discussed “Under the Dome,” a documentary about air pollution that went viral and made a huge impact in China. Another of their episodes was on the American version of “Ghost in the Shell,” a motion picture that ultimately made a big impact in the U.S. with the casting of Scarlett Johansson as an Asian character.

The listeners of “East Asia for All” are mainly people who are interested in East Asian pop culture. This group tends to be highly educated and of older generations. Since the podcast is in English, the demographics of the listeners skew toward English speaking countries. This is good, says Brzycki, because the intended audience is Americans. However, they would love to reach younger people and people of different cultures and languages.

Brzycki said her No.1 goal for the podcast is to help Americans understand East Asia as comprehensible, and not different or unknowable. Montgomery added on to this by asking, “How do we approach being fans of East Asian pop culture when we ourselves are not East Asian, and how do we navigate that space?” There’s often a lot of misunderstandings and missed opportunities in those conversations. Brzycki and Montgomery said that the role of history in every piece of pop culture is something they strive to give context and understanding to.

Something Brzycki and Montgomery have thought a lot about is how their podcast fits into their work as academics. As junior professors, they had to sell it as part of their work, as an important element that deserved support and attention. Brzycki said that doing the podcast has been a good opportunity to hone her communication skills and be able to communicate complex ideas or knowledge that might seem unimportant in an understandable way. The podcast also allows Brzycki and Montgomery to pull information out of the pop culture sphere and incorporate it into academic knowledge. 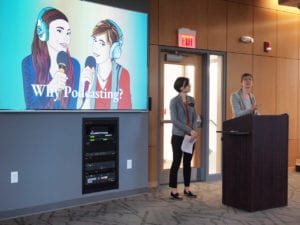