With the new school year, Chartwells, Saint Mary’s food-service provider, has altered various aspects of how it operates in the main cafeteria with changes such as an allergen-free station, cooking classes, and the new plates.

The recently-added “G8” station was incorporated to accommodate students with food allergies. The station essentially avoids, “the 8 major allergens that people tend to have an issue with,” said Curt Coshenet, the Director of Dining Services. To avoid cross-contamination, the area is also separate from where other food is prepared. 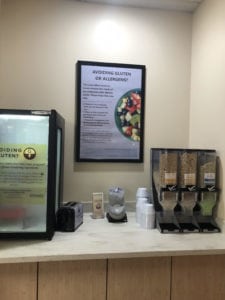 Also, new plates have been introduced to the cafeteria this year which has created a bit of a buzz on campus. The plates are now rectangular versus the circular plates that were used in past years. Amanda Kintzi, a senior at Saint Mary’s, said, “The plates are definitely smaller, but they’re still useable. It’s just inconvenient.” While other students have also expressed their distaste for the smaller plates, Coshenet has an explanation for the change. He says the plates are “a trend that is happening all over, and I’m the last to jump on the ship.” The decision to finally make the switch to the smaller plates, Coshenet said, was made because the plates are recycled plastic, which makes them more green, and they are easier on the staff because they are not as hot when they come out of the dishwasher. Students speculated that this was a move for encouraging portion control. Coshenet said, “The plates were not changed for [portion control]. This is the trend. Eat less more often than gorging yourself.” 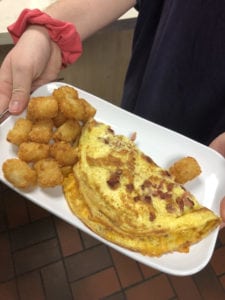 There are other changes that are more health conscious. The smoothies made at Cardinal Coffee are now made with real fruit, yogurt, and juice versus smoothie powder. In addition, monthly cooking classes are now offered for students who are interested. Students can sign up for these “Teaching Kitchen” classes the week before the class in the Toner Dining Hall or online at dineoncampus.com/saintmarys. Chartwell’s dietitian, Sarah Nicklay, also highlights a new superfood each month in her newsletters.

Most of the staff is new as well. Coshenet said that he brought back about four employees from last year, but everyone else is new.