Editor’s note: This story was written by Cassandra Sepp.

Birdies and slapshots are two things that one Saint Mary’s student focuses on daily. Alec Rudh is a senior, double majoring in sports management and business analytics and minoring in public relations. He is scheduled to graduate this December but may stay an extra semester and take classes focusing on videography and photography, while playing one more tennis season as a cardinal.

When Rudh is not playing tennis or being a full-time student, he works as a United States Hockey League (USHL) scout for the Cedar Rapid Rough Riders. The USHL is the biggest junior hockey league in the world. Rudh’s job requires him to travel every winter to different hockey games across the Midwest states and look for players to recruit for the team he represents. Some of the different things Rudh looks for in a player is spirit, skill, size, speed, and shooting ability. Rudh stated that character is one of the biggest factors in determining if a player should be recruited or not. About once a month there is a scout call where Rudh turns in his reports and discusses his findings. The season goes from September to April and then his team does a draft in May.

When asked what the coolest part of his job was, he said, “getting to go to all these hockey games for free, that’s what I loved to do in high school so continuing to do that is really special.” Rudh has worked for his team since last October and is one of the youngest scouts in the league. Rudh will also be starting to scout another team in the North American Hockey League this fall called the El Paso Rhinos from Texas.

Rudh was also an intern for the American Junior Golf Association (AJGA) this past summer. The AJGA is like the PGA tour for junior players. The mission of the AJGA is to find players to play division one golf. Rudh’s role as an intern was to focus on producing social media for the association. This included making Tik Toks, YouTube videos, and Facebook, Instagram, and Twitter posts. He also was a rule officiate for the tournaments and started and scored players. Throughout this internship Rudh traveled to Illinois, Indiana, Michigan, Ohio, North Carolina, and Pennsylvania. Rudh said a normal working day started at around 4:30 a.m. and didn’t end until around 10 p.m. Rudh said he enjoyed being able to play many beautiful courses and getting to know players. One story he shared was about a player that had one semester left in high school and zero D1 offers who ended up winning a tournament and getting 5 different D1 offers within a week. He said watching this happen was really cool and the emotions showed by the player and his dad showed how impactful sports can be.

Rudh’s goal after college is to get a full-time job either in hockey scouting or sports social media. 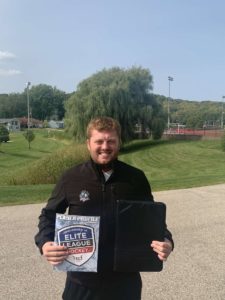 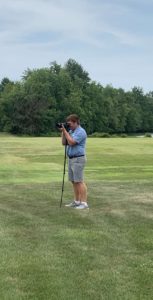