Editor’s Note: This story was written by Morgan Prokosch for COM301 Advanced Newswriting.

Short-term study abroad trips, such as a recent trip to Mexico, give Saint Mary’s University of Minnesota students an opportunity to have fun, get out of their comfort zones, and study foreign cultures, said Kyle Black, an associate professor of Spanish and the faculty leader of the Mexico trip.

This summer, Black led a group of Saint Mary’s students on a 15-day tour of Mexico, where they stayed in the Yucatán Peninsula city of Mérida. While there, the students were immersed in the culture of the area, where there is a big Mayan presence, Black said.

Saint Mary’s sophomore Sarah Hannan participated in the tour, and said that she really enjoyed her short-term study abroad experience. She said that the group got to take part in a lot of fun cultural activities while in Mexico. Some of these activities included participating in an all-day cooking class where they made local dishes, taking salsa dancing lessons, spending time at the beach, taking a bus tour of Mérida, and attending cultural events in the city square, such as a singing concert and La Vaqueria, an ancient dance festival.

The students also got the chance to attend classes at a Mexican institute, where they learned lessons on topics such as Mayan hieroglyphics and language. “We really did a lot, everyday was something,” Black said.

Hannan said that one of her favorite parts of the trip was visiting many different Mayan ruins, including taking weekend trips to both Tulum and Chichén Itzá. These ruins, also known as archaeological sites, are in abundance in the part of the country they visited, Black said. He enjoyed feeling the emotion of the students when they visited these sites.

Black said that there were many purposes of the trip, including focuses on learning about the food and ancient agricultural practices of the region. It was also a good chance for students to practice their Spanish skills, he said.

Similarly, it was meant to diminish any stereotypes they might have, Black said. Both Hannan and Black said that the Mayan culture is not dead, but very much alive. “There are still Mayan people,” Hannan said. “It was cool to interact with them and also to see the mixture of the Spanish culture with the indigenous Mayan culture.”

Beyond just the learning aspect of short-term study abroad trips, Hannan said that the experience also helped her with personal growth. She said that the trip immersed her in the culture, which helped her to get out of her comfort zone. “I’m really shy, so it was just kind of getting me to talk with the other students, with the natives [in Spanish], so that was like the biggest takeaway,” she said.

Like with all Saint Mary’s short-term study abroad trips, all students that traveled to Mexico participated in a class leading up to travel. The Mexico trip was a part of the class “Mayan Civilization and Culture in the Yucatán.” The class met once a week starting around midterm. They read various texts, such as the Mayan creation story and other various texts about food and indigenous Mayan languages, and had various discussions to prepare for travel, Hannan said.

Hannan said that she would encourage other students to do a short-term study abroad program, as they may not get the chance to travel like that again. “College is, you know, pretty much your only chance to affordably travel with a group and get the experiences,” she said. Hannan also said that short-term study abroad programs are great for people who don’t want to be gone for a long time and that are afraid of traveling alone, because the trips are only about two weeks long and are faculty led. “You are with the professor all semester and then you travel with them … you don’t have to be super independent if that’s what’s holding someone back,” she said.

If any students want to have a short-term study abroad experience of their own, there are two opportunities coming up next semester that they can participate in. The English department is leading a tour of England and the Business department is leading a tour of Germany, Austria, and the Czech Republic. Both trips will take place in May 2020. Applications for both programs are due on Dec. 2, and are available in the Study Abroad Office, which is located in room 103 of The Heights International Center. Students can view the study abroad webpage on the Saint Mary’s website or contact the Study Abroad Office to learn more about either of these trips, as well as about any other upcoming study abroad opportunities. 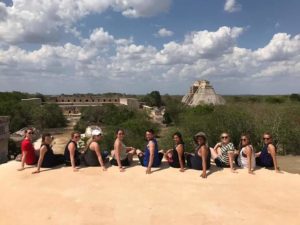