Seniors, professors and administrators alike gathered to celebrate the accomplishments of those graduating this December on Tuesday, December 4th.

The gathering began with small talk and hors d’oeuvres before transitioning into a semi-formal ceremony where professor Mark Barber acted as the master of ceremonies. After Barber ’s introduction, Campus Minister Kirsten Rotz opened with a prayer that blessed and welcomed all who gathered and those who are graduating. The ceremony then continued with a speech from President Father Burns. In his address to those gathered, he stated “We all share in the joy of making it to milestones in our lives, and some of you receiving are particularly joyful, I hope, to have made it to this day and all that has gone into getting you to this point and all the promise that lies ahead.” He continued on sharing about how the hope and joy that we receive in this time of advent is very similar to the joy we share for graduation. Father Burns ended his address to the seniors sharing a quote from Bradley Whitford stating “Take action. Every story you have ever connected with, every leader you have ever admired, every little thing that you have ever accomplished is the result of taking action. So you have a choice. You can be a passive victim of circumstance or you can be the active hero of your own lives”. President Burn’s closed with his own remarks stating “Now is the time I would say to take joyful action and let your life sing with all creation.”

After the ceremony, seniors took the time to share, reflect and talk with each other. Senior Aleaha Zabel shared she thought that “the Senior Gathering was a wonderful time to share a few moments with people that I rarely see as well as close friends.” Being a student teacher, Zabel said she is “not on campus very often” and has “not been able to see many classmates.” Now that her time at Saint Mary’s is ending she said it was also nice to share time with her peers at the gathering. Later on, as the seniors continued to share their feelings about the event, another Senior, Colleen Garry, wished the remaining seniors “a great last semester because it really does fly right by your eyes,” and advised them “to really enjoy their last months in college, but also to finish strong by working hard.” Many seniors shared similar sentiments and expressed their gratitude for their time at Saint Mary’s.

Along with being able to spend time with peers, students also had time to converse with professors. Though there are many occasions when students are able to converse with their professors, this night meant more as the seniors were able to say to farewell to those who have helped them accomplish their goals over the past years. As we spoke about sharing and giving thanks this holiday season Zabel shared, “I would like to thank the Education Department as a whole. Before coming to Saint Mary’s I knew my dream and goal was to become a teacher, but that dream could not have been fulfilled without the instruction, guidance, and support of so many professors I have had the privilege of working with throughout my time at Saint Mary’s.” Similarly, Garry also shared that her journey without her English and Communication Professors would not have been the same. She also gave a special thanks to “my amazing friends for helping me through tough times and making these few years the best I’ve had so far.”

The night was one of many where students and staff came together to share during the holidays and celebrate the amazing accomplishments of the soon-to-be graduates. So, as we move further into the season of giving and thanks, the Saint Mary’s community can reflect on all the joyful action that is yet to come, as well as, celebrate and wrap up another great semester. 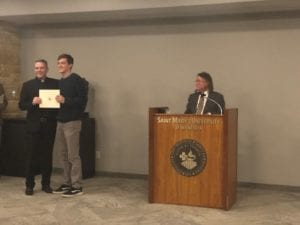 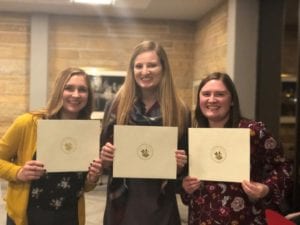