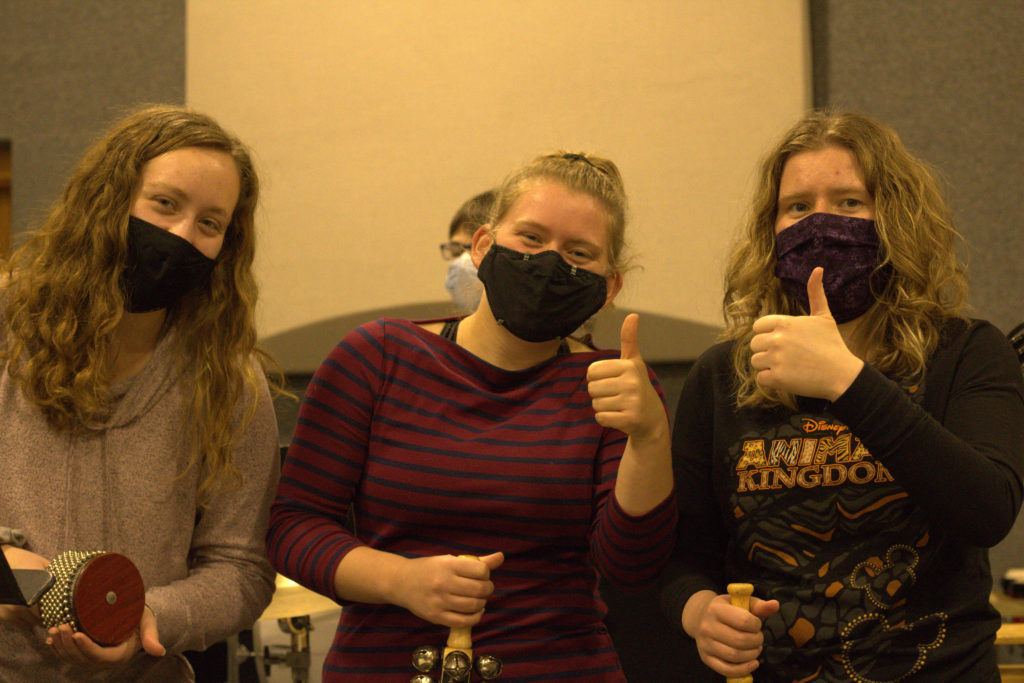 Editor’s Note: This story was written by Jonah Stafford.

Hoping to spread school spirit for years to come, a group of students have channeled their passion for music into the newly relaunched Saint Mary’s pep band club.

The pep band club gives students the opportunity to make music with each other at sporting events. The music is fun for the musicians, the fans, and the student athletes. The club plans to support the upcoming winter sports season.

In June, sophomore Patrick Derleth began planning the process of relaunching the club, connecting with staff members like James “Twigs” McGuire and Dr. Janet Heukeshoven. He then took up the role of band manager, communicating with SMU administration, RISE, and student senate to pitch his club idea. Early in the planning process, he brought Nathan Herr on board, a senior music education major, to direct the pep band.

“Music in my life is so much more than just a hobby,” said Herr, who is active in many ensembles and organizations relating to music at SMU, including the Phi Mu Alpha fraternity and the concert band.

The club was officially approved in late September. With an average attendance rate of 20-30 students per rehearsal, the pep band club is already making waves around the SMU campus. As the pep band performance season approaches, Herr hopes that “when we show up at a game, we’ll have enough members to make ourselves known and ensure future participation.”

Derleth believes that “having a good band helps to augment, support, and uplift the college athletic experience” and is very excited for the group’s upcoming performances.

“The morale boost the pep band will bring to the SMU and greater Winona communities is necessary more than ever, especially in the era of the COVID-19 pandemic,” says Derleth.

The pandemic, as well as the safety precautions it entails, could be the biggest future obstacle for the club, with Derleth likening it to a “red tape” that could put a damper on the club’s activities, depending on how severe it is in the near future.

Herr is optimistic because “live music is coming back to campus” as COVID-19 restrictions loosen. He hopes that this budding musical ensemble can serve as an outlet for musically talented students of different majors and levels of commitment.

Regarding the future of the SMU pep band club, Derleth expresses his desire for this club to stand the test of time.

“I want it to keep going long after I’m gone,” he said.

Meanwhile, Herr offers advice to other students who also might want to start a club.

“Don’t be afraid to start and don’t work alone,” he said. “Do it with a friend.”

The reestablishment of the SMU pep band was indeed a collaborative process, and with Derleth and Herr leading the charge, the budding club seems to be striking all the right chords.

For more information about joining the pep band club, email phderl19@smumn.edu. All are welcome. Performance dates are pending and based on home sporting events.