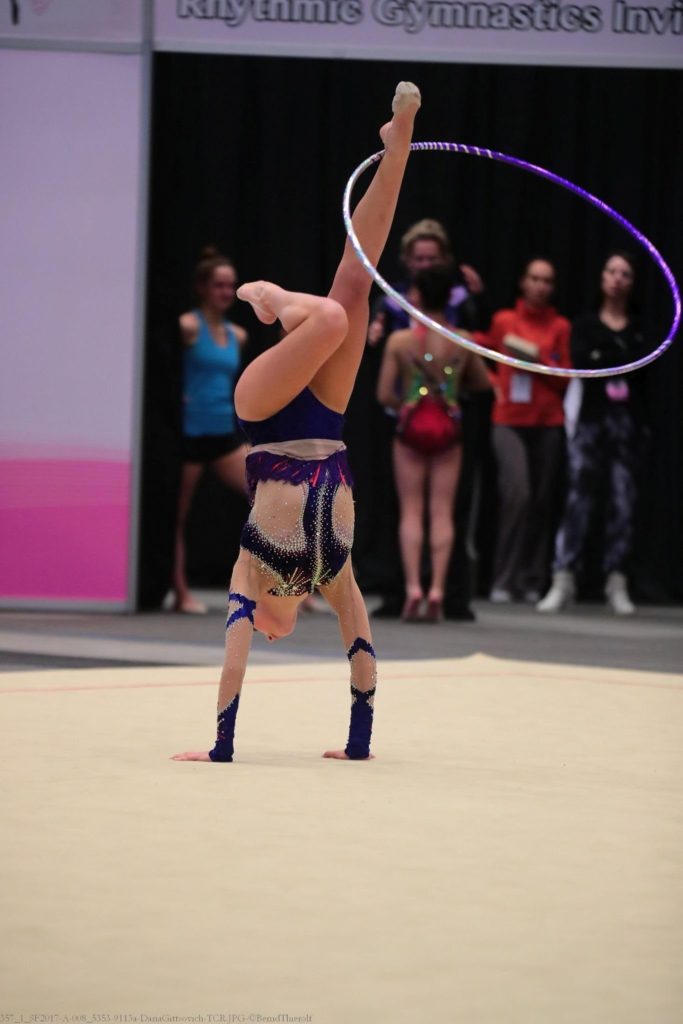 Gittsovich competing at a meet.

Editor’s Note: This story was written by Jonah Stafford.

Most people struggle to complete a cartwheel. Imagine completing three in a row and then catching a flying hoop or ball. This is just a regular day for freshman Daria “Dasha” Gittsovich, a nationally recognized and decorated rhythmic gymnast.

Gittsovich is a celebrated rhythmic gymnast from Minnetonka, Minnesota. Born in Russia, she moved to Minnesota as an infant after being adopted by her Russian-Jewish parents.

“Adoption was the best thing that ever happened to me,” said Gittsovich. “My parents have always been supportive throughout my life.”

At the young age of three, Gittsovich began to learn the ropes of rhythmic gymnastics. She won a first place medal at age five in a competition in North Dakota as the youngest competitor in her age group. After that, she began to compete more seriously.

Gittsovich competed nationally for the first time at the age of eight, where she achieved a fifth place finish out of over fifty competitors, despite being sick with a fever. She continued to compete for several years, even competing against the US Rhythmic National Team.

After four years of trying, Gittsovich qualified for the national team. She won three medals at the 2017 USA Gymnastics championships, took home four medals at the Junior Olympics, and even competed internationally.

As a competitor, Gittsovich was adept with all of the apparatuses in rhythmic gymnastics, although she specialized in ball and club routines. She describes her ball routines as “graceful and emotional,” while her clubs routines are more of a “pop-off style,” allowing her to juggle the clubs and have fun.

Gittsovich recalls being “honored to wear the USA flag in competition.” She was proud to represent the state of Minnesota while she was competing. She became a role model for rhythmic gymnasts in Minnesota and across the country.

Alexandra Soldatova and Yana Kudryavtseva of the Russian Rhythmic Gymnastics Federation are a few of Gittsovich’s role models. She compares them to “the Simone Biles of rhythmic gymnastics.” She looks up to many gymnasts, whether they are rhythmic or artistic gymnasts.

“I see her being determined and want to be determined too,” Gittsovich said of Simone Biles.

It was a combination of physical injuries and the mental toll of a competitive environment that led to Gittsovich recently retiring from competition. Now at college, she regularly practices in the Gostomski Fieldhouse on the Winona campus. She emphasized that she practices for herself and her love of rhythmic gymnastics.

Gittsovich is currently enrolled in the 3+2 PA program. After graduation, she hopes to work as a physician assistant in a healthy working environment with a big network of people. Although her life is busy, she hopes to remain dedicated to what she loves the most: her family and gymnastics.